An acutely inflamed pancreas – known in medical terms as acute pancreatitis – causes sudden, intense pain in the upper abdomen. The inflammation is often triggered by gallstones.

What is acute pancreatitis?

If a person has an inflamed pancreas, this is known as pancreatitis. An acute inflammation is indicated by sudden, extremely intense stomach pain. This is often caused by gallstones or heavy alcohol consumption.

Acute pancreatitis is treated in hospital as it can be fatal if particularly severe.

Most people fully recover from the acute inflammation after 1 to 2 weeks. In the event of complications and secondary diseases, treatment can take several months.

What are the symptoms of acute pancreatitis?

Acute pancreatitis almost always causes severe pain in the upper abdomen, which can radiate all the way round into the back. This is usually accompanied by nausea and vomiting, and often also by a high temperature, circulatory problems and a bloated stomach.

The sudden pain is so severe that most people with an inflamed pancreas immediately consult their doctor. They are then usually admitted to hospital on the same day.

The second most common cause is heavy alcohol consumption. This connection has already been confirmed by various studies although how exactly alcohol triggers pancreatitis is not yet clear.

Certain drugs or a viral infection can also cause the pancreas to become inflamed. Other factors that increase the risk include bile duct strictures and increased levels of certain fats (triglycerides) or calcium in the blood.

In up to 10 percent of people with pancreatitis, the cause cannot be reliably diagnosed.

How common is acute pancreatitis?

Each year, about 55,000 people with acute pancreatitis are treated in hospitals in Germany. That equates to about 70 in every 100,000 inhabitants.

Most people with pancreatitis are over the age of 45. Furthermore, the condition is slightly more common among men than women.

How does acute pancreatitis progress?

The way acute pancreatitis progresses depends on the severity of the inflammation and the extent to which it is attacking the glandular tissue. About 80 percent of people treated recover from acute pancreatitis after about 1 to 2 weeks. However, some still have pain and digestive problems or feel totally exhausted even after they have been discharged from hospital.

About 20 percent of patients experience serious secondary conditions. In such cases, full recovery can take several weeks or months. About 3 percent of people with an acutely inflamed pancreas die of complications.

If the inflammation was caused by gallstones, relapses are very common. The gallbladder can be removed to prevent this.

How is acute pancreatitis diagnosed?

If a patient is suspected of having acute pancreatitis, the doctor will start by palpating the stomach. He/she will also ask about risk factors such as taking medication, alcohol consumption and indications of gallstones such as cramp-like upper abdominal pain (colic). A blood sample is also usually taken and an ultrasound performed.

The blood sample is used to determine factors such as the content of the enzyme lipase. This is produced in the pancreas and usually travels into the intestine. If the lipase content in the blood is significantly higher than usual, this indicates inflammation of the pancreas. Other blood test results can indicate biliary stasis.

There are several health conditions that have symptoms similar to those of acute pancreatitis. These include a heart attack, an inflamed gallbladder and a perforated stomach due to an ulcer.

Usually, an ultrasound alone shows if the pancreas has changed due to inflammation. Often, gallstones can also be seen on an ultrasound.

If a suspected case of acute pancreatitis is confirmed, the patient will be hospitalized on the same day.

Important: Stones in the bile duct can also be found by means of an endoscopy. Here, an endoscope is introduced through the esophagus and into the duodenum (endoscopic ultrasound). An “endoscopic retrograde cholangiography” (ERC) can be required to detect pancreatitis that has been caused by gallstones or is associated with an inflamed bile duct.

How is acute pancreatitis treated?

It is not possible to treat the causes of acute pancreatitis. Treatment primarily focuses on measures that reduce the symptoms and relieve the strain on the pancreas.

As acute pancreatitis can lead to dehydration, an infusion is initially used to ensure an adequate fluid intake. Medication is used to alleviate symptoms such as pain, nausea and vomiting. Strong drugs such as opioids, which make patients drowsy or groggy, are often needed to combat the pain.

To enable the pancreas to recover, patients are not given any solid food until they have recovered somewhat and regained their appetite. In the case of minor pancreatitis, patients can often start to eat again after 2 days. If the symptoms persist for longer, an artificial diet may be needed to supply the body with sufficient nutrients.

Further information on the treatment of acute pancreatitis can be found on the website gesundheitsinformation.de.

In cooperation with the Institute for Quality and Efficiency in Health Care (Institut für Qualität und Wirtschaftlichkeit im Gesundheitswesen – IQWiG). As at: 06/07/2021 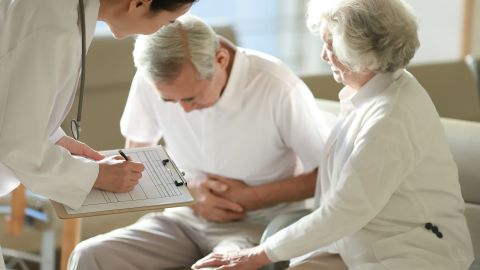 Gallstones can trigger spasmodic epigastric pain. They develop from thickened bile fluid. Some people have gallstones without noticing them. 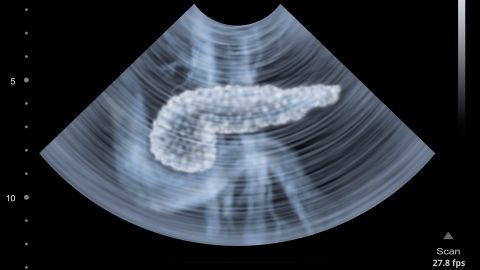 About 19,000 people in Germany develop pancreatic cancer each year. The tumor is often detected very late and so the chances of recovery are accordingly unfavorable. 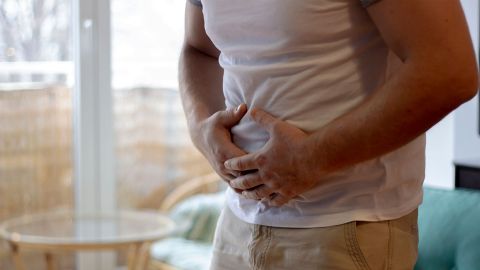 Acute appendicitis is accompanied by severe abdominal pain and usually requires surgery. A possible complication is a ruptured appendix, which can be life-threatening.