Sugar in the form of glucose supplies vitally important energy to the body. But it also contains many calories and can for instance increase the risk of caries or overweight. Whether sugar is healthy or unhealthy depends on many factors, including the type and quantity.

When people talk about sugar, they usually mean sucrose (saccharose). This is most commonly used to sweeten drinks or for cooking and baking, and is moreover contained in many processed products. Sucrose is obtained from sugar beets or sugar cane.

But sugar comes in various forms in our food. These forms all belong to carbohydrates. Grape sugar (dextrose or glucose) and fruit sugar (fructose) are the carbohydrates with the simplest structure – and they are known as single sugars (monosaccharides). This type of sugar can be utilized especially quickly by the body. Sweet fruits like grapes contain a lot of it. Double sugars (disaccharides) are always composed of two molecules. For example, the aforementioned sucrose consists of one glucose molecule and one fructose molecule.

Furthermore, there are multiple sugars and polysaccharides. These have a much less sweet taste than fructose or sucrose. Polysaccharides exist for instance as starch in cereals and potatoes.

What are the good characteristics of sugar?

When the brain or muscles need energy quickly, monosaccharides like glucose supply this especially rapidly. The red blood cells and renal medulla also depend on glucose as an energy source.

Glucose supplies the brain in particular with abundant energy

Along with oxygen, glucose is an essential building block for making basic functions of the body like breathing, heartbeat and conscious thought possible and sustaining these. The body’s biggest “energy hog” is the brain.

Energy is very quickly available after consumption of glucose and fructose. On the other hand, other types of sugar with more complex structures are utilized (much) more slowly in the digestive process. During digestion, these sugars are converted into glucose, among other things, which is absorbed into the blood via the intestinal wall. With the aid of the hormone insulin, which empties out the pancreas, glucose then gets into the body’s cells.

Sugar is processed more quickly than proteins or fats

The major advantage of sugar is that unlike proteins and fats, it can be converted into energy quickly in the body. This makes it ideal when the body needs energy in a hurry. For this reason, sportspeople for instance reach for a bit of glucose, fruit like bananas, isotonic drinks containing sugar or an energy gel from a tube shortly before or during strenuous competitions.

Interesting fact: Sugar also plays an important role in the manufacture of foods and their storage life. For example, it is used as a preservative in jam. Sugar moreover assists fermentation in yeast-raised pastry and causes the development of colors and aromas in foods thanks to caramelization, among other things. In addition to that, the various kinds of sugar have different amounts of solubility, which impacts the quality and flavor of foods.

How much sugar should be consumed at most?

The German Nutrition Society, German Association for the Study of Obesity and German Diabetes Society recommend that no more than a tenth of the daily calorie requirements should consist of free sugar. For calorie requirements of about 2,000 kilocalories, that is equivalent to a maximum daily sugar amount of 50 grams. Both the monosaccharides and disaccharides that manufacturers or consumers add to foods are included in this daily amount, along with the sugars naturally contained in honey, syrup or fruit juices.

However, most people in Germany consume far too much sugar, especially via confectionery and drinks containing sugar like fruit juices and soft drinks. However, the increased sugar consumption is also due to the fact that many foods contain sugar without consumers being aware of it. These include white bread, dairy products sweetened with sugar such as fruit yogurt and TV dinners like frozen pizza or ketchup. For this reason, the German Federal Ministry of Food and Agriculture has developed a National Reduction and Innovation Strategy to reduce the amounts of sugar that are added during the manufacture and processing of foods.

When can sugar be dangerous?

According to the German Nutrition Society, the average sugar consumption in Germany is well over the recommended amounts.

Consuming too much sugar:

Risk of overweight and “fatty liver”

Regular high consumption of drinks containing sugar especially increases the probability of weight gain and thus the development of obesity. That is because unlike the sugars contained in foods, sugar from drinks does not satisfy. As quickly as sugar can supply energy to the body, it also utilizes it just as fast. If the energy is not needed just then, the body tries to save up the sugar “for a rainy day”.

To begin with, the glycogen stores in the liver and muscles are filled up, after which the body converts the sugar into fatty acids and creates new fat depots. At the same time, high insulin and blood sugar levels send a signal: there is enough energy, the existing fat can currently remain in storage. In addition, if high sugar consumption is combined with a lack of exercise, the body stores more and more fat and does not break down existing fat depots.

An unfavorable proportion between sugar consumption and utilization thus leads to the storage of excess energy in fat cells. These not only multiply in fatty tissue, but also in the liver and can thus cause an enlargement of this organ – commonly called non-alcoholic fatty liver disease.

Those who regularly consume too much sugar are thus also encouraging the long-term development of metabolic diseases such as type 2 diabetes and increased triglyceride values (hypertriglyceridemia) as well as the development of cardiovascular diseases.

These diseases frequently develop as a result of being overweight and of non-alcoholic fatty liver disease. The addition of industrially produced fruit sugar (fructose) in many fruit gums, desserts, baked goods and especially soft drinks can moreover result in an increased production of uric acid in the liver during the conversion process. A high uric acid level in turn can encourage the development of gout.

Caries as a direct consequence

Children are already taught that too much sugar and candy is bad for the teeth. This means that the bacteria in plaque convert the sugar into acid. This in turn attacks the tooth enamel and thereby paves the way for a tooth to be destroyed by caries. The more sugar gets into our mouths in the form of foods and sweetened drinks, the greater the risk is for dental caries. That is especially the case if dental hygiene is not the best.

The video below explains what causes caries, how it is treated and how it can be prevented.

Institutions like the German Cancer Research Center allude to an indirect cancer risk through sugar, because this leads to weight gain. But consuming too much sugar is not the only factor in gaining weight.

Among other key factors are in particular a diet with too much fat, excessive alcohol and too little exercise. According to new findings, being overweight and especially obesity increase the risk for at least thirteen types of cancer. The German Cancer Society thus also recommends restricted sugar consumption as part of a health-enhancing diet.

Doing without sugar entirely: does that work?

If glucose were no longer consumed through food, the body would initially fall back on its glycogen reserves stored in the liver and muscles. Only in the event of more prolonged and vigorous exercise does the body also use body fat to supply energy.

A sharp drop in the blood sugar level results in feelings of weakness and shivering. Very severe hypoglycemia may even cause unconsciousness. When sugar, sugar-sweetened foods and drinks are given up, the body can obtain this required energy from starch. Starch is contained in pasta, bread or potatoes, among other things. Sugar consumption can thus be reduced but not stopped entirely.

Many so-called low-carb diets are also built on the reduction of sugar and carbohydrates. These are based on going without carbs (short for carbohydrates) as much as possible. If the body needs more carbohydrates than it is getting through food, it obtains energy from the fat reserves and muscle mass.

While the desired weight loss can often be achieved, there can also be an unwanted loss of muscle mass. Furthermore, consumption of foods containing proteins and fats increases with low-carb diets. A low-carb diet can thus have undesirable side effects, for example increasing cholesterol values (hypercholesterolemia), food cravings and last but not least, the so-called yo-yo effect with weight being gained again.

What alternatives to sugar are there?

Artificial sweeteners and natural sugar substitutes as alternatives to sugar are a matter of heated debate among experts. That is because even if these substances contain no calories or fewer calories than sugar, they are not necessarily a healthier alternative to conventional sugar.

Among natural sugar substitutes with reduced calories for instance is the birch sugar xylitol, as well as stevia and sorbitol. Artificial sweeteners like aspartame, cyclamate or saccharine usually have no calories at all. The European Food Safety Authority considers consumption of these sweeteners to be harmless, but the health benefits are still debated.

There is constant debate over whether sugar should be replaced by honey, agave syrup, maple syrup or molasses. However, the German Nutrition Society warns that these sweeteners are no healthier than conventional sugar. They are utilized in the metabolic process or converted into fat in just the same way as other kinds of sugar.

Reviewed by the German Nutrition Society (Deutsche Gesellschaft für Ernährung e.V.). As at: 01/08/2021 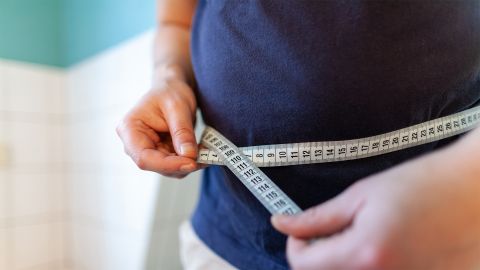 Being overweight is common and can become a health problem. A balanced, whole-food diet combined with physical activity can help. 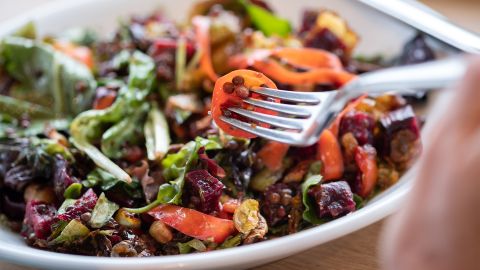 Healthy eating can boost overall health and help prevent certain illnesses. A healthy diet includes plenty of fruit, vegetables and whole grains, and is low in sugar and salt.