A brain aneurysm is a bulge in an artery in the brain. Many people who have an aneurysm can go their whole lives without noticing it. In some cases, brain aneurysms are discovered by chance. Certain factors increase the risk of a brain aneurysm rupturing and causing a life-threatening brain hemorrhage.

What is a brain aneurysm?

An aneurysm is a pouch-shaped or berry-shaped bulge in an artery. It occurs when part of the wall of a blood vessel is no longer strong and elastic and bulges outwards as a result.

Aneurysms can occur on various arteries, for instance the abdominal aorta. If one of these bulges occurs in an artery in the brain, this is referred to as a brain aneurysm or cerebral aneurysm. This type of aneurysm often develops at branches in the arteries that supply blood to the brain. If a brain aneurysm ruptures, it may cause a life-threatening brain hemorrhage.

However, not all brain aneurysms rupture. In some cases, they cause no symptoms and can often remain undetected for the remainder of the person’s life. If symptoms develop or if there are risk factors that increase the likelihood of a burst aneurysm, it is essential that the individual receives treatment.

What are the signs of a brain aneurysm?

Many people with an aneurysm have no symptoms. Doctors refer to this as an asymptomatic aneurysm.

If a brain aneurysm is particularly large or in a sensitive location, it may press on the brain or on nerves, such as the optic nerve. This often causes symptoms such as headache, impaired vision, or eye muscle paralysis.

What causes a brain aneurysm?

An aneurysm occurs if the wall of the blood vessel loses some of its elasticity at a certain location. This can be caused when the vessel walls are put under pressure due to high blood pressure, inflammations, or smoking. In addition, the normal aging process causes blood vessels to gradually lose elasticity over time.

In rare cases, an aneurysm may develop as a result of an inherited disorder, such as Ehlers-Danlos syndrome. This causes a weakening of connective tissue, and therefore also of the blood vessel walls.

Which factors increase the likelihood of developing a brain aneurysm?

In general, women are at a higher risk than men of developing brain aneurysms. People whose parents or siblings have had a brain aneurysm are also more likely to develop an aneurysm.

These factors also make it more likely that an aneurysm will rupture at some point. However, whether a rupture will occur also depends on how big the aneurysm is and where it is in the brain.

How common are brain aneurysms?

Around 3 out of every 100 adults have a brain aneurysm. Many people can have several aneurysms in the brain at the same time.

How does a brain aneurysm develop?

Many brain aneurysms cause no changes or symptoms.

If the brain aneurysm gets bigger over time, symptoms may occur. The risk of developing complications such as a ruptured aneurysm also increases with the size of the aneurysm.

If the aneurysm ruptures, this triggers a brain hemorrhage. A hemorrhage increases pressure in the skull, causing damage to the brain tissue.

Sudden, very severe headaches are an indication that this is occurring. Initially, the pain occurs at the back of the neck and head in particular. The pain then spreads to the entire head and down into the back.

Other symptoms of a brain hemorrhage are:

Important: A brain hemorrhage is a life-threatening emergency that requires urgent medical treatment.

A brain aneurysm may also cause another, rarer complication, i.e., the blockage of an artery in the brain. This happens when a blood clot forms inside the aneurysm and then moves from there into a small branch of the artery. As a result, the artery may become blocked by the clot, leading to a stroke.

How is a brain aneurysm diagnosed?

A brain aneurysm is often discovered by chance when the head is being examined because of another condition.

If an individual is experiencing frequent headaches or impaired vision, the cause of the symptoms can be identified by a magnetic resonance imaging (MRI) scan or computed tomography (CT) scan.

Aneurysms are particularly easy to detect using a technique known as digital subtraction angiography (DSA), in which an x-ray is taken with and without injecting a contrast medium. The computer can then create an image in which only the blood vessels are visible.

How is a brain aneurysm treated?

Risk factors should always be avoided as far as possible. Important precautions therefore include treatment of high blood pressure and giving up smoking.

Important: Treatment is only essential if the aneurysm causes symptoms or if the patient is at an increased risk of having a ruptured aneurysm. However, as many factors can affect this risk, it is not always easy to determine whether the brain aneurysm should be treated.

If a patient and his/her doctor decide against treating the aneurysm, a magnetic resonance imaging (MRI) scan or computed tomography (CT) scan will be performed every 1 to 3 years. This scan will indicate whether the aneurysm has changed and whether the patient is at risk of a brain hemorrhage.

If an individual is experiencing symptoms or is at an increased risk of developing complications, one of the following two treatment options is normally used:

Both procedures prevent the flow of blood to the aneurysm so that a rupture cannot occur. However these interventions always involve a degree of risk. Before deciding on one of these treatments, it is therefore important for a patient to consult a specialist in this area, i.e. a neurologist or neurosurgeon.

In cooperation with the Institute for Quality and Efficiency in Health Care (Institut für Qualität und Wirtschaftlichkeit im Gesundheitswesen – IQWiG). As at: 05/17/2022 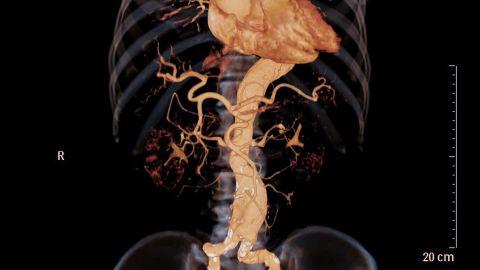 An abdominal aortic aneurysm occurs when part of the aorta in the abdomen stretches and bulges outward. It is usually harmless but, if it ruptures, it is a life-threatening emergency. 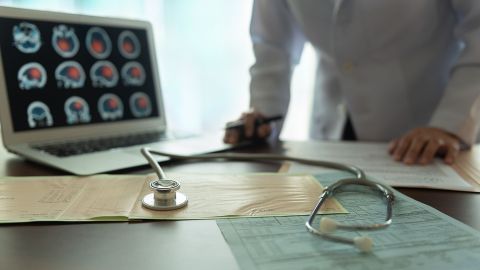 During a stroke some of the blood supply to part of the brain is cut off. This causes sudden severe headaches, paralysis or slurred speech. 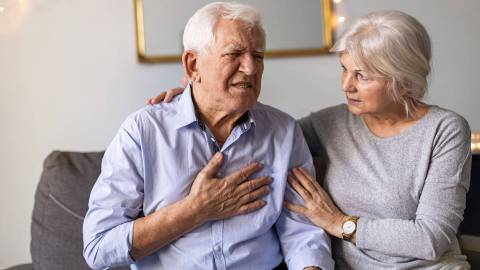 An aortic dissection occurs when blood penetrates the wall of the body’s main artery (aorta) through a tear, causing the lining of the aorta to split. Emergency surgery is often required.