Esophageal cancer is a tumor in the esophageal mucosa. About 7,300 people in Germany get it every year. In the early stage, difficulty swallowing may be a warning signal. Along with tumor treatment, those affected also need individual nutrition advice.

What is esophageal cancer?

Squamous cell carcinoma of the esophagus

The tumor originates from the epithelial tissue of the mucosa.

Adenocarcinoma of the esophagus

Glandular cells have degenerated. It occurs almost exclusively at the junction between the esophagus and stomach.

What are the symptoms of esophageal cancer?

In many of those affected by it, esophageal cancer only causes symptoms when the disease is advanced. At this time, the tumor is already bigger and causing noticeable problems.

A typical warning signal is discomfort when swallowing. The tumor is already constricting the esophagus by then. Difficulty swallowing initially occurs during consumption of solid food. As the disease progresses further, the tumor can also impede swallowing of soft food and liquid.

Symptoms that may indicate a tumor disease in the esophagus are:

Anyone with symptoms persisting over an extended period of time should not hesitate to see a doctor. General Practitioners can already narrow down what is causing the symptoms and, if necessary, initiate further diagnostic steps with specialists. The specialist who is responsible for the esophagus is called a gastroenterologist.

How does esophageal cancer develop?

Esophageal cancer can – like any other cancer – develop purely by chance. A cause for the changed behavior of cells cannot be proven with certainty in individual sufferers. Various factors are often working together when cancer develops.

However, scientists have determined factors that statistically increase the risk of esophageal cancer. Some concern lifestyle, others are caused by pre-existing conditions:

Important: Even people who live healthy lifestyles and have no pre-existing health conditions can develop esophageal cancer. However, by avoiding risk factors that are in one’s own control, the risk is reduced.

Further information about the risk factors for esophageal cancer can be found on the German Cancer Research Center’s Cancer Information Service website (in German).

Esophageal cancer: how does the disease progress?

To begin with, the tumor is restricted to the topmost layer of the mucosa. If the tumor grows further, it gets into deeper layers of the esophageal wall. Over time, the tumor disease can spread to neighboring tissue, into lymph nodes and other organs.

Tumor cells in other organs (metastases)

With the bloodstream or lymph stream, cancer cells can get into other organs and form what are known as metastases. In the case of esophageal cancer, metastases most commonly occur in the lymph nodes, liver and lungs. But other organs can also be affected.

How do doctors detect esophageal cancer?

During the esophagoscopy, the doctor guides a tube as thick as a thumb (endoscope) into the esophagus through the patient’s mouth. A video camera is attached to the end of the tube. It sends the doctor an image of the esophageal mucosa.

If the doctor notices during the examination that the mucosa of the esophagus is changed, he will take tissue samples at the affected sites. He will then send these to a laboratory. There another specialist will check under a microscope whether there are cancer cells in the tissue samples.

If the suspected tumor has been confirmed, the doctors will suggest further examinations. With these, they can ascertain how much the tumor has already spread and whether metastases have formed. Specialists use the term staging for these examinations.

Imaging techniques are used to determine how far esophageal cancer has spread. Additional examinations can be used as needed. The techniques used depend on the individual situation – not all patients need all examinations.

The following imaging examinations may be considered:

Depending on the results of the staging, the doctors involved in the treatment will plan the therapy.

For information about individual examination methods, see the website of the Cancer Information Service of the German Cancer Research Center (in German).

What are the treatment options for esophageal cancer?

How is cancer treated?

The video below explains how cancer can be treated.

For a tumor that is growing relatively superficially in the esophageal mucosa, an endoscopic resection is usually an adequate treatment. The surgery is similar to the inspection of the esophagus. The difference: the doctor pushes a small loop or special knives through the endoscope. These are used to completely cut the tumor away from the mucosa.

Alternatively, the doctor can use heat to destroy the tumor cells. The procedure is called ablation.

If the tumor has grown deeper into the tissue, many patients will need an operation. In the course of this, the doctors remove parts of the esophagus, but some patients will have their entire esophagus taken out.

Furthermore, chemotherapy or combined radiation and chemotherapy may be used as a treatment, depending on the situation also in addition to surgery.

In an operation, the doctors remove the tumor and adjacent parts of the esophagus. If the tumor is extensive, the entire esophagus will be taken out.

If the tumor is located at the junction of the esophagus and stomach, it may be necessary to remove a section of the stomach or sometimes the entire stomach.

During the surgery, the doctors remove both the tumor and the adjacent lymph nodes. These are subsequently examined in a laboratory and give some indication of whether the cancer cells have spread beyond the tumor.

After the operation, the usual ingestion of food is not possible for several days. In this situation, patients normally receive their food via a thin tube (probe).

Pre- and post-operative radiation and chemotherapy

Patients with a locally advanced tumor can benefit from chemotherapy or combined radiation therapy and chemotherapy before the surgery.

The pre-treatment may shrink the tumor. That increases the likelihood of the doctors being able to completely remove it during the operation. A smaller tumor also means a less stressful surgery. The pre-treatment moreover reduces the risk of relapse after a successful operation.

For patients who have received chemotherapy but no radiation prior to surgery, the treatment is completed with further chemotherapy after the operation.

Radiation and chemotherapy as an alternative to surgery

For some patients, the tumor in the esophagus cannot be surgically removed. Instead of an operation, a combination of radiation therapy and chemotherapy can be an option for them.

The same applies to patients who cannot cope with a complicated surgical procedure because of their general condition.

For patients whose tumor growth can no longer be stopped by the doctors, the focus is on treating illness-related symptoms and maintaining as good a quality of life as possible.

If metastases have formed in other organs, chemotherapy can sometimes prolong life. So-called targeted drugs are also possible in this situation. Radiation therapy can moreover help relieve pain caused by the tumor.

You can find details about the treatment methods for esophageal cancer and associated side effects on the German Cancer Research Center’s Cancer Information Service website (in German).

Can patients with esophageal cancer get rehabilitation?

Cancer can be very stressful. Most people with esophageal cancer need time after the treatment to get healthy again and resume a normal daily routine. Cancer patients therefore have the option of a targeted rehabilitation.

Rehab is used to prevent or lessen the consequences of illnesses and therapy. For people in employment, the aims of rehabilitation also include returning to work.

Rehab measures are tailored to the specific needs of patients with esophageal cancer.

On one hand, rehab should improve physical discomfort and impairments. Possible measures are nutrition advice and nutritional therapy, physiotherapy and muscle-building training. Other rehab measures assist patients with handling the cancer diagnosis as well as possible emotional consequences like anxiety or depression.

Anyone wishing to enter rehab can discuss it with the doctors treating them. They will certify the need for rehabilitation. Furthermore, hospital social services and local cancer counseling centers and health insurance providers or pension funds can answer questions about rehab.

Further information about rehabilitation after oncological illnesses can be found on the German Cancer Research Center’s Cancer Information Service website (in German).

What is the aftercare procedure for esophageal cancer?

Most people affected by esophageal cancer still have to attend regular doctor or hospital appointments after treatment. The goal of these aftercare appointments is to check the patient’s health and do something about the aftermath of illness or therapy. Another aim is early detection of a relapse.

A further aspect that doctors look for during aftercare is the nutritional condition of sufferers. For example, anyone who has difficulty following an adequate diet may receive nutrition advice. If there is need for psychological counseling can also be determined during aftercare.

As aftercare, patients are examined regularly after the end of therapy, initially at short intervals, then at longer ones. If the tumor was removed endoscopically, doctors perform inspections of the esophagus as part of aftercare. After an operation or radiation and chemotherapy, the doctors concentrate on newly occurring symptoms during aftercare.

With an advanced illness, follow-ups replace aftercare. They take place at regular intervals or as needed. The aim is to maintain the patient’s quality of life for as long as possible using a therapy adapted to the symptoms.

What role does nutrition play in esophageal cancer?

Nutrition is very important with esophageal cancer. The tumor can make it difficult to swallow food and cause pain during eating. And for many sufferers, the treatment also makes their nutritional situation worse.

Even before the treatment, many patients have to first of all gain weight in order to be adequately prepared for the stressful therapy. If for instance difficulty swallowing has caused malnutrition, nutritional therapy in the form of high-calorie fluids or puree may be necessary.

After the treatment, patients with esophageal cancer usually need nutrition advice to increase their body weight again long-term. In the consultation, they learn which foods they can tolerate and how they can make their diet balanced.

Physicians from various disciplines work closely together to treat esophageal cancer. Hospitals with particular experience in treating patients with esophageal cancer can demonstrate this through certification. The German Cancer Society regularly checks the hospitals for compliance with certain professional requirements.

You can find the addresses of the certified centers on the OncoMAP website.

Do you have further questions about dealing with the condition in everyday life and additional support options? Visit the website of the Cancer Information Service of the German Cancer Research Center (in German).

If you have any questions about esophageal cancer, you can also make personal contact with the Cancer Information Service by dialing the freephone number 0800 - 420 30 40 or writing an email to krebsinformationsdienst@dkfz.de.

In cooperation with the Cancer Information Service of the German Cancer Research Center (Krebsinformationsdienst des Deutschen Krebsforschungszentrums). As at: 11/10/2021 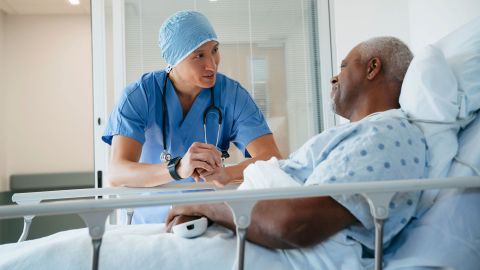 Bowel cancer is one of the most common types of cancer in Germany. Each year, approximately 58,000 men and women are diagnosed with bowel cancer. 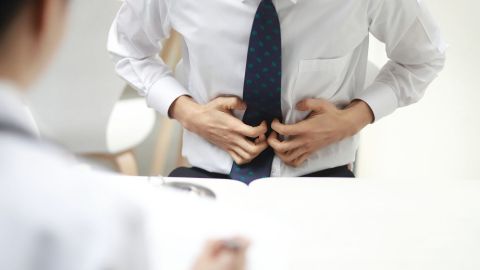