People with gastroesophageal reflux disease (GERD) – also known as chronic acid reflux – experience frequent, severe heartburn and burping. Esophagitis (inflammation of the esophagus) may also occur. Read on to find out what causes GERD and what helps alleviate the symptoms.

What is gastroesophageal reflux disease?

Many people are familiar with heartburn – a burning pain radiating from the upper abdomen into the throat. However, people with gastroesophageal reflux disease (GERD) experience frequent, severe symptoms.

For most people, it’s normal to experience burping/belching occasionally, especially after a large meal. Up to 20 out of every 100 people in Western countries have recurring symptoms such as heartburn or burping. While these symptoms are unpleasant, they do not normally have any further consequences.

If symptoms such as very frequent or severe heartburn and burping occur, the individual may be suffering from gastroesophageal reflux disease.

Gastroesophageal reflux disease is abbreviated as GERD. It is also known as chronic acid reflux. The term “gastroesophageal” means that the stomach and esophagus are affected. “Reflux” describes the increased regurgitation/backwash of acidic gastric juices into the esophagus.

The video explains what causes reflux, its symptoms and what can be done to prevent it.

Essentially, the lower sphincter muscle in the esophagus seals the cardia – the uppermost part of the stomach that meets the esophagus. It only opens when food mixed with saliva arrives there. To prevent the stomach contents from being regurgitated, this junction then closes again. The stomach may stretch significantly, for example, due to eating a very large meal. The seal on the cardia may then become temporarily loosened. Air or some of the stomach contents then travel upward. The seal may also open for no apparent reason. The rising digestive juices irritate the mucosa of the esophagus – this is known as heartburn. If this occurs over a longer period, the mucosa of the esophagus can become inflamed and painful.

What are the symptoms of gastroesophageal reflux disease?

Heartburn is a typical symptom of GERD. It is experienced as a burning sensation radiating upwards from the upper abdomen or the region behind the breastbone and into the throat. As well as heartburn and burping, GERD may also cause the individual to have difficulty swallowing. Other possible symptoms include a burning sensation in the throat, a bad taste in the mouth and gurgling noises in the stomach. In many cases, GERD also causes a heavy feeling of fullness in the stomach, sometimes accompanied by nausea and vomiting.

Some people experience a frequent or relatively large reflux of stomach contents into the esophagus. If this reflux causes the esophagus to become inflamed and affects a person’s quality of life, this indicates that the person is suffering from GERD.

Other symptoms include a dry, hacking cough, asthma attacks, a rasping voice and hoarseness and toothache. These occur if the regurgitated digestive juices enter the trachea (windpipe) and irritate the airways. If burping causes gastric juices to reach the mouth, they may also attack the teeth.

GERD may have a range of causes.

One possibility is that the cardia, i.e. the entrance to the stomach, is no longer able to close properly. The cardia is closed by muscles. If these do not work properly, additional gastric juice may be regurgitated. The initial cause of chronic acid reflux often remains unknown.

For some people, a hiatal hernia (or hiatus hernia) is the cause. The diaphragm is a wall of muscle that separates the thoracic cavity (thorax) from the abdominal cavity (abdomen). The esophagus passes through the esophagus and empties into the stomach directly behind it. With a hiatal hernia, the stomach bulges through the opening in the diaphragm and protrudes slightly into the thoracic cavity. The cardia is then higher than the diaphragm and, as a result, it can no longer support the sphincter muscle located between the esophagus and stomach.

Many people report that their symptoms are triggered or worsened by stress. Certain foods also seem to have the same effect. Symptoms are also more likely to occur after physical exertion or when moving the body in a certain way – for example when bending or lying down.

Experts are currently debating whether other factors may be responsible for causing reflux and heartburn. Possible risk factors include being overweight, smoking and drinking alcohol.

Reflux and heartburn may also possibly be caused by an impaired esophagus. For example, the esophagus may be too slow to push back the rising gastric juices or may have an overly sensitive response. In addition, symptoms may be intensified by certain medication, such as some used to treat high blood pressure or the contraceptive pill.

What is the outlook for gastroesophageal reflux disease?

GERD is usually permanent. The illness largely progresses in phases. Symptom-free periods alternate with episodes of more severe heartburn and other symptoms.

Many sufferers worry that reflux and heartburn could cause complications. The illness does not normally worsen over time.

However, the mucosa may be altered in some people due to the high acidity at the bottom end of the esophagus. This change is called “Barrett’s esophagus”. It develops in about 5 out of 100 people with reflux.

The risk of esophageal cancer is increased somewhat in those with Barrett’s esophagus. Out of one thousand people affected by reflux, it is estimated that, within a period of ten years:

How is gastroesophageal reflux disease diagnosed?

GERD is diagnosed on the basis of the typical symptoms it causes. This means that it is important to describe the symptoms in detail when consulting a doctor and to take note of when and how often each symptom occurs.

If the symptoms suggest GERD, the doctor may try what is known as “empiric therapy” by prescribing medication that blocks stomach acid for the patient for a period of two weeks. These drugs are known as proton pump inhibitors. If the treatment works, it is very likely that the patient does indeed have GERD.

How is gastroesophageal reflux disease treated?

Anyone who has severe heartburn or gastroesophageal reflux disease needs to change some everyday habits. For example, they may need to give up certain foods or beverages such as alcohol. This may seem especially hard to begin with, but can ultimately pay off. If a lifestyle modification fails to relieve the symptoms, medication may help. Surgery is also possible for a severe progression of the disease.

For more information about GERD and how it can be treated, visit gesundheitsinformation.de.

What do I need to watch out for in everyday life if I have GERD?

Reflux and heartburn can be very unpleasant and stressful for those affected. They can disrupt sleep and prevent eating and drinking from being enjoyable activities. In this way, GERD can impact a person’s overall quality of life and general well-being. For some people, it can even make them withdraw from social life and be frequently absent from work.

Treatment can be unpleasant and sufferers may need to be patient and wait to see results. However, many positive reports indicate that sufferers fare better after treatment and find that their gastroesophageal reflux disease becomes less of a burden.

For more information and real-life stories by people with GERD, visit gesundheitsinformation.de.

In cooperation with the Institute for Quality and Efficiency in Health Care (Institut für Qualität und Wirtschaftlichkeit im Gesundheitswesen) (IQWiG). As at: 01/18/2021 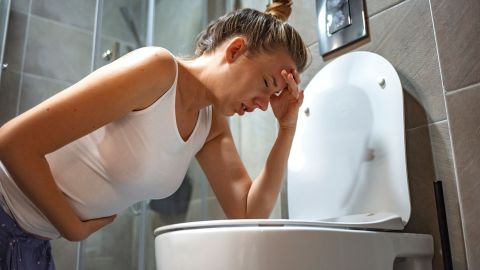 Typical symptoms of acute gastritis are stomachache, feeling full, bloating, gas and heartburn. In most cases, gastritis is caused by a bacterial infection or the use of certain pain medication.