Leprosy – also called Hansen’s disease (HD) – is a bacterial infection that was already described way back in ancient times. These days it still occurs, particularly in India, South America and South-East Asia. Though it has become less common around the world, and though leprosy can be cured, it can still take a serious course. Sufferers continue to be ostracized because of the skin changes leprosy causes.

The word leprosy comes from the Greek-Latin, and means something like “flaky” or “rough”: this refers to the skin changes caused by the disease. Amongst the characteristic symptoms of leprosy is nerve damage which can cause paralyses and sensory disorders.

In Germany the disease used to be known as “ostracization”. That was due to the fact that people with leprosy were excluded from human settlements. People with leprosy continue to be ostracized and stigmatized even today.

Though its worldwide prevalence has been very successfully checked, the goal of the World Health Organization (WHO) to eradicate leprosy completely has not yet been achieved. So the WHO’s efforts are aimed at further reducing the number of new infections, preventing disabilities caused by leprosy wherever possible, and countering discrimination against sufferers.

What are the symptoms of leprosy?

Leprosy causes visible changes to the skin and nerve damage, along with a loss of sensitivity to pain. Mucous membranes, airways, and eyes can also be affected. Two to 20 years, or even more, may pass by before the first symptoms appear after infection with the pathogen (incubation time).

Four different types have been identified: indeterminate leprosy, tuberculoid leprosy, lepra lepromatosa (lepromatous leprosy), and borderline leprosy. The severity of a leprosy illness, and which symptoms occur, depends on a person’s immune defense and on the bacterial load.

This type of leprosy evolves in an immune system that is essentially functioning: as the immune defense actively fights the pathogens, tuberculoid leprosy is not as serious as lepra lepromatosa. A few asymmetrical, sharply defined skin lesions occur, often with a raised border. On darker skin the lesions are paler than the surrounding skin, and they are sometimes reddened, especially on paler skin. With tuberculoid leprosy there are also visible nerve swellings and nerve damage that can badly impair sensitivity to pain and sweat production.

When there is no immune response, i.e. the defense is working poorly, symmetrical, reddish skin lesions, which sometimes appear pale on darker skin, form all over the body. Untreated, this rash penetrates deep into the skin. This happens mainly in the face and can cause the eyebrows to be lost. Over time swellings and knots can give the face the appearance of a lion, known as “leonine facies” in medical terms. Nerve damage causes pronounced sensory disorders, including loss of sensitivity to pain and temperature. Swellings, lesions, deformities, and limb disfigurements are some of the potential consequences of sensory disorders with lepra lepromatosa, which often lead to sufferers being ostracized.

Gradations or hybrids of tuberculoid leprosy and lepra lepromatosa are known as borderline leprosy. In these cases, symptoms of either form may occur.

Infection is from person to person. Leprosy is probably transmitted via droplets which are generated and spread by sneezing. It is still unclear whether transmission can also occur via skin contact. Leprosy is not highly contagious, only lengthy and close contact can cause an infection that causes illness. As the Mycobacterium leprae bacterium multiplies very slowly, signs of illness often only occur several years after infection.

Which risk factors are known with leprosy?

As leprosy is only a moderately contagious infectious disease, the living conditions and general health play an important role in infection. In particular, malnutrition and a weak immune system favor infection. Climate tends to play a subordinate role.

Where and how frequently does leprosy occur?

In 2018 most cases occurred in India (120,334), followed by Brazil (28,660) and Indonesia (17,017). However, progress has been made in the fight against leprosy: in ever more cases, the disease is being diagnosed and treated before disabilities occur. Moreover, the number of children affected fell by 24 percent between 2012 and 2018, while the figure for adults only fell by nine percent.

One case of leprosy was reported in Germany in 2019. Cases amongst tourists returning e.g. from South America or South-East Asia to Germany are rare.

How does leprosy progress?

There are mild, but also very severe forms. The Symptoms section explains in more detail. How the disease progresses depends very much on the infected person’s immune system: the weaker the immune defense, the more unimpeded can the pathogens grow in the body and make the illness severe.

When a severe case of leprosy goes untreated, hand and feet disfigurements, serious infections, and blindness may occur. Even today, in many places these outcomes cause the sufferer to be socially ostracized.

How can leprosy be prevented?

Currently there is no approved leprosy vaccine. However, in 2019 an initial clinical study in the USA to develop a leprosy vaccine (LepVax) was successful. It was shown that the vaccine is very safe and causes no serious adverse effects. Another study in Brazil has been underway since summer 2020 with patients with an early leprosy illness.

The tuberculosis vaccine offers a certain protection against tuberculoid leprosy.

How is leprosy diagnosed?

The symptoms provide early indications. If leprosy is suspected, the pathogens must be proven. With the so-called skin smear method, the skin is scored with a scalpel in certain places to obtain a little lymph fluid. However, with this test, the bacterial load in 70 percent of patients is not high enough to prove the disease.

Testing tissue samples gets more reliable results. This requires a biopsy, i.e. a small piece of skin is taken and histologically tested in a lab.

How is leprosy treated?

Leprosy can be cured. Early treatment is important in preventing the leprosy from causing disabilities.

The illness is treated with multiple drugs simultaneously so that there is no resistance, i.e. the bacteria do not become insensitive to the drugs being used. The therapy takes at least six months.

The active substances that can be combined include:

Which of these drugs a patient is given depends on the type of leprosy that has been diagnosed.

The therapy should be given in specialized centers because inflammatory reactions can occur during treatment which require rapid, targeted medical responses.

Patients do not generally need to be isolated. This is only necessary if open lesions occur.

Reviewed by the German Neurological Society (Deutsche Gesellschaft für Neurologie e.V.). As at: 11/12/2020 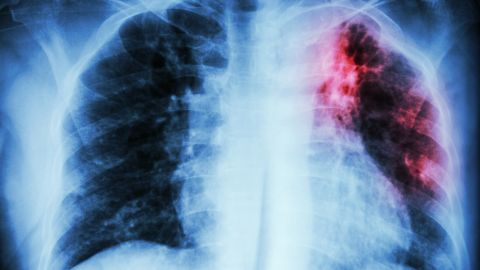 Tuberculosis (TB) is a bacterial infectious disease most commonly affecting the lungs. It is relatively rare in Germany.