With peripheral artery disease, the blood circulation in the arms or legs is impaired. This article explains the typical symptoms of the circulatory disorder, the associated risk factors and how it is treated.

What is peripheral artery disease?

Peripheral artery disease (PAD) is a circulatory disorder that mainly affects the legs but in rarer cases the arms. The condition can affect one or both sides of the body. It is usually caused by vessel calcification (arteriosclerosis), i.e. blood vessels that have become constricted due to the build-up of deposits.

Most people have no symptoms in the early stages of the disease. Once more advanced, PAD in the legs typically causes pain, for example when walking, which subsides when at rest.

In severe cases, tissue dies due to the lack of oxygen supply. This may lead to amputation as a last resort treatment option.

Milder cases of the disease must also be taken seriously as they can indicate the presence of further cardiovascular diseases.

Interesting fact: As people with peripheral artery disease in the legs often stop and stand still due to the pain, as though browsing in a shop window, the condition is also known as window-shopper’s disease.

What are the symptoms of peripheral artery disease?

People with peripheral artery disease (PAD) do not usually have any symptoms in the early stages.

As the disease progresses, they experience pain in their calves, thighs, feet, buttocks or arms. These occur after a certain distance when walking.

If PAD is advanced, the pain can occur after walking less than 200 meters. It disappears again after resting for a few minutes. The medical term given to such walking difficulties is claudicatio intermittens or intermittent claudication.

In the advanced stages of the disease, the pain primarily affects the front of the foot and toes, even when at rest. The symptoms can sometimes be alleviated by pacing up and down.

As a result of the increasingly poor blood circulation, in the late stage of the disease, sudden pain occurs in the affected limbs, which can lead to numbness and ultimately paralysis.

It is also possible to experience a feeling that is often described as “formication” (insects crawling on the skin). Pale, cool skin and a weak pulse that is often no longer perceptible are also typical.

As the blood supply is no longer sufficient, even minor wounds stop healing properly. This leads to the formation of ulcers, especially on the feet. Bedridden PAD patients are at a higher risk of developing pressure sores on their legs.

Gangrene has been recorded in some severe cases. This means that the skin tissue and deeper tissue die. Typical gangrene symptoms include blackened areas on the foot, especially on the toes (“smoker’s leg”).

The most common cause of peripheral artery disease (PAD) is vascular calcification (arteriosclerosis). This is a chronic inflammation of the veins where deposits of cells, blood fats and other substances build up and constrict the bloodstream.

As a result, less blood flows through the arteries and – depending on the severity – the oxygen supply to the affected areas of the body is impaired or completely cut off. The more advanced the atherosclerosis, the worse the blood supply.

Important: Other health conditions can also cause an arterial blockage, including tumors, inflamed blood vessels or thromboses (clots that block blood vessels).

Which factors increase the risk of peripheral artery disease?

People who smoke are at a higher risk of peripheral artery disease (PAD). Smoking also increases the risk of a more serious outlook.

Other factors that increase the risk of PAD include:

How common is peripheral artery disease?

Studies show that about 3 to 10 percent of people in industrial nations have peripheral artery disease (PAD).

The probability of developing the disease increases with age: 15 to 20 percent of people aged 70 or above have PAD.

How does peripheral artery disease progress?

In the early stages of peripheral artery disease (PAD), the blood vessels are not very calcified and are barely constricted, allowing the body to still be sufficiently supplied with oxygen and nutrients.

As the calcification of the vessels (arteriosclerosis) progresses, so too do the symptoms. First, pain occurs due to the reduced blood flow – initially only when moving but later also at rest.

The reduced blood circulation also impairs wounds’ ability to heal. It is no longer possible for enough nutrients and oxygen to reach wounds, potentially resulting in the formation of chronic wounds and ulcers. These can in turn cause bone inflammation (osteomyelitis).

If the blood supply to the tissue is extremely low or inexistent (ischemia), the tissue dies.

Important: The outlook of peripheral artery disease depends on various factors. For example, people who continue to smoke after their diagnosis often experience a more severe case of the disease.

Stopping smoking – when does the body recover?

How quickly does the body recover when you stop smoking? The video below provides information on this.

Is it possible to screen for peripheral artery disease?

People with an increased risk of peripheral artery disease (PAD) are advised to undergo routine screening even if they have not developed any symptoms.

These include people who smoke, people with diabetes mellitus and people for whom PAD runs in the family.

Among other things, doctors will measure the blood pressure in the arm and ankle. The two results (also known as the ankle-brachial index) are used to determine if the circulation is already impaired.

How is peripheral artery disease diagnosed?

To diagnose peripheral artery disease (PAD), the doctor will first ask about the symptoms and possible risk factors.

These include lifestyle habits such as smoking and physical exercise, but also existing conditions of close relatives.

A physical examination then follows. Cool, pale or bluish skin and a weak or no longer perceptible pulse are signs of poor blood circulation. Chronic wounds, ulcers or dead tissue, especially on the lower legs, ankles or feet, are further symptoms of the disease.

If the symptoms are not clear, the ankle-brachial index is determined. Doctors use this examination, also known as the ABI test, to measure the blood pressure in the upper arm and at the ankles. The ratio between the two values indicates whether the blood circulation is impaired and can make it possible to diagnose the stage of the disease.

A treadmill test is also carried out: this determines the person’s ability to walk at a treadmill speed of 3.2 kilometers per hour with an incline of 10 to 12 percent. In other words, people walk very briskly and climb 10 to 12 meters within a distance of 100 meters. The ankle-brachial index is measured before and after the exercise. A decrease of 20 percent is a clear indication of PAD.

To determine where and to what extent the arteries are constricted, doctors use imaging techniques such as a special ultrasound (duplex sonography) or X-ray. In the case of the latter, a contrast agent is often injected into the blood vessels to make it easier to see the constricted areas.

How is peripheral artery disease treated?

There are several ways to treat peripheral artery disease (PAD):

Depending on the PAD risk factors, various measures are possible, including:

People with PAD who can only walk a limited distance without pain suffer from “intermittent claudication”. At this stage, structured walking exercises are used. This is the most important non-medication-based treatment. It is effective if the exercises are performed three times a week for 30 to 60 minutes. If the exercises are initially done under the guidance of experts for at least 3 months, people can then do them independently.

Doctors can also prescribe medication to promote blood circulation. This is primarily done if exercise therapy has not helped.

If PAD vastly restricts people’s lifestyle and neither walking exercises nor medication has sufficiently alleviated the symptoms, minimally invasive surgeries are possible.

Doctors insert a balloon into the blood vessel using a catheter and expand the constricted area (vascular dilation). They can also insert a stent or create a bypass.

If body tissue has already died, life-threatening infections can occur. Depending on how much tissue is affected, amputation may be necessary.

Doctors also advise people with PAD to lead a healthy lifestyle. This includes not smoking, a balanced diet and regular exercise. This also helps prevent other cardiovascular diseases such as a stroke or heart attack.

Those who struggle to quit smoking can use nicotine replacement therapy to wean themselves off cigarettes or have their doctor refer them to a smoking cessation program.

What aftercare is required?

As peripheral artery disease (PAD) is a chronic disease, regular monitoring is important.

The first aftercare examination should take place 3 months after the initial treatment. If the symptoms have not improved sufficiently during this period or the disease has continued to progress, further medical treatment is possible.

If the treatment is working well, an annual check-up by a family doctor then suffices.

In cooperation with the Institute for Quality and Efficiency in Health Care (Institut für Qualität und Wirtschaftlichkeit im Gesundheitswesen – IQWiG). As at: 04/06/2022 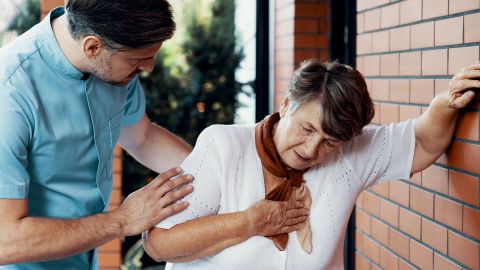 With a coronary heart disease (CHD), the major blood vessels that supply the heart with oxygen are constricted. Shortness of breath and chest pain are possible symptoms. 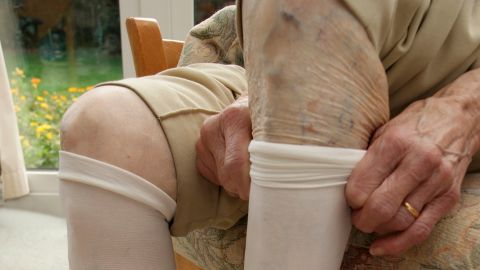 In people with heart failure, the heart isn't able to pump enough blood around their body. Common signs are shortness of breath, difficulty breathing and exhaustion.