In modern medicine, antibiotics are indispensable. However, increasing numbers of bacteria are becoming resistant to antibiotics, mainly due to the incorrect use of these drugs. This article explains how resistance develops and spreads and what can be done to combat it.

What are antibiotics and what is antibiotic resistance?

Antibiotics are drugs used to fight bacteria. They are prescribed to treat bacteria infections. However, they are ineffective against viruses.

If antibiotics are used too frequently, unnecessarily or not as prescribed by a doctor, the risk arises that bacteria can become insensitive to the antibiotics, so that they no longer work. This is known as antibiotic resistance.

Some bacteria have become resistant to commonly used antibiotics and some have even become “multi-resistant” – in other words, they are insensitive to several different classes of antibiotics. These “superbugs” can be dangerous. If there are no longer any drugs capable of fighting them, then they can cause infectious diseases that cannot be treated effectively – leading to a situation similar to that before antibiotics were discovered.

To combat the further development and spread of antibiotic-resistant bacteria, it is important to distinguish between viral and bacterial pathogens when treating infectious diseases. Doctors can use laboratory testing or rapid screening to identify viruses and bacteria. Prescribing an antibiotic only makes sense if the illness is caused by bacteria. However, an antibiotic is not by any means always necessary when treating bacterial infections.

When are antibiotics used and how do they work?

Antibiotics are regularly used to treat antibiotic infections in both human and veterinary medicine. It should be borne in mind, however, that no every respiratory infection or urinary tract infection needs to be treated with an antibiotic. Examples of human diseases for which it is advisable and necessary to use antibiotics include:

The fact boxes developed by the Harding Center for Risk Literacy explain the benefits and harms of using antibiotics to treat the common cold, acute bronchitis and middle ear infections.

When used correctly, antibiotics are usually high effective and well tolerated by patients. This is because they attack certain structures that only exist in bacteria but not in human cells.

However, antibiotics have the drawback that they attack not only harmful, disease-causing bacteria, but also the useful bacteria that live in the human body. Useful bacteria are particularly plentiful in the intestines. These are known as intestinal bacteria or gut flora. If gut flora are destroyed by frequent use of antibiotics, it becomes easier for disease-causing bacteria to become established in the gut. These can cause chronic diarrhea, for example.

Important:To protect the helpful bacteria living in an on our bodies, antibiotics should only be used when absolutely necessary. Your family doctor will know when you really need an antibiotic.

How do bacteria develop resistance?

Some types of bacteria are naturally insensitive, i.e., resistant to certain antibiotics. However, there are also many bacteria that, over time, have gradually become resistant to previously effective antibiotics.

New resistance develops due to changes in the bacteria's genetic information. This process is known as gene mutation and it can occur randomly. If the mutation is beneficial to the bacteria, it is preserved and passed on to subsequent generations. Some bacteria can also transfer their resistance genes (genetic information that makes them antibiotic-resistant) to other bacteria. This process is called gene transfer.

Bacteria can become resistant to an antibiotic in a number of different ways. These include:

As resistant bacteria have a survival advantage over non-resistant bacteria when treated with antibiotics, they multiply more effectively and win the upper hand. Hospitals and intensive animal farming are especially significant in relation to the development and spread of antibiotic-resistant bacteria. A particularly large number of antibiotics are sometimes used in these settings, which puts pressure on the bacteria to develop resistance. If antibiotics enter the environment, this also makes antibiotic resistance more likely to develop. Therefore, measures to avoid antibiotic resistance need to be implemented across all areas – in human medicine, veterinary medicine and in environmental policies and practices. This is known as the “One Health” concept.

Important: The development of antibiotic resistance is enabled and accelerated if antibiotics are used excessively and incorrectly – that is, in the wrong dosage or not for the prescribed period of time.

Why is increasing antibiotic resistance problematic?

Certain people are particularly vulnerable to bacterial infections because their immune system is weakened and unable to fight bacteria effectively without support. These include, in particular:

These people depend on the availability of a sufficient number of effective antibiotics because even a harmless infection can be dangerous for them. People who are normally fit and healthy also require an antibiotic for certain bacterial infections, such as bacterial blood poisoning (sepsis).

However, some bacteria have become resistant to commonly used antibiotics and some are even “multi-resistant” – in other words, they are insensitive to several different classes of antibiotics. One very well-known example is the “hospital bug” MRSA, which stands for methicillin/oxacillin-resistant Staphylococcus aureus. However, other types, such as vancomycin-resistant enterococci (VRE) and multi-resistant Gram negative bacilli (MRGN), represent an ever-growing threat. VRE are intestinal bacteria that are resistant to certain antibiotics. MRGN is a large group comprising different types of bacteria – many of which also live in the intestines, though some are also to be found on the skin. Their common trait is that they are resistant to 3 or even 4 different classes of frequently used antibiotics.

Only a very small number of antibiotics, known as “reserve antibiotics”, are effective against these multi-resistant organisms (MROs) – also known as “superbugs”. As very few new antibiotics are expected to be developed in the foreseeable future, it is important to preserve the effectiveness of existing antibiotic medication. It is already the case that, in Europe alone, around 33,000 people – mostly infants under the age of 1 and older people – die every year from serious infections with resistant bacteria because the available antibiotics can no longer treat them effectively. Deaths in Europe due to antibiotic-resistant bacteria almost tripled between 2007 and 2015.

What can be done to prevent the spread of antibiotic resistance?

The problem of ever-increasing antibiotic resistance has been known about for a long time and strategies have already been developed to counteract the trend. Foremost among these is the Global Action Plan on Microbial Resistance, which was developed by the World Health Organization (WHO). It has given rise to the German Antibiotic Resistance Strategy (“Deutsche Antibiotika-Resistenzstrategie”, or DART for short). Among other things, it envisages the monitoring and recording of antibiotic consumption and resistance – this is known as antibiotic resistance surveillance (ARS). The objective is to reduce overall use of antibiotics.

Antibiotic resistance has also prompted changes to infection protection legislation in Germany. For example, there is now a legal requirement to notify the relevant authorities of certain infections, such as MRSA. On this legal basis, a commission set up by the Robert Koch Institute (RKI) makes recommendations for the diagnosis and treatment of infectious diseases.

Many medical practices have adopted the concept of “antibiotic stewardship”. This concept is the appropriate and responsible use of antibiotics. For example, before prescribing an antibiotics, doctors should identify microbe that is causing the disease and choose a suitable antibiotic on this basis. After all, not every antibiotic is effective against every disease-causing germ. Decisions about treatment duration, dosage and form of antibiotic administration also need to be carefully considered.

What can we all do to halt the growth of antibiotic resistance?

In addition to the global measures described above, every individual can also play their part to slow the development of new forms of antibiotic resistance. This has a chance of success if we all strive to: 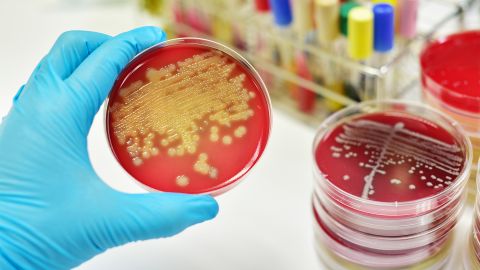 Sepsis, also known as blood poisoning, is an uncontrolled inflammatory reaction of the body to infections. It needs to be treated very quickly in hospital. 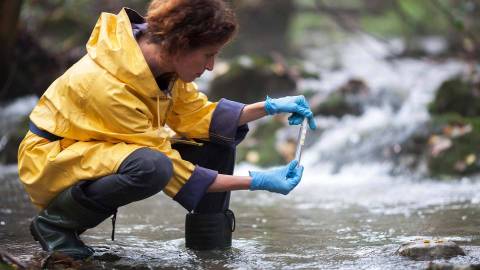 Antibiotic resistance – what role is played by the environment?

When antibiotics enter the environment, antibiotic-resistant bacteria can evolve and spread. This article explains how this happens. 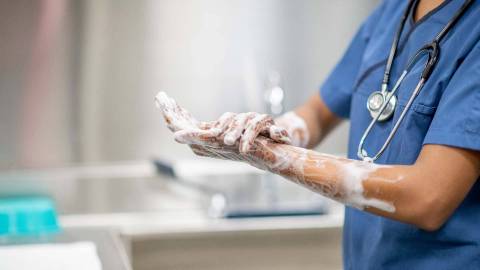 Hygiene in hospitals is important to provide protection against infectious diseases. Read more here about typical pathogens found in hospitals and about hygiene measures.